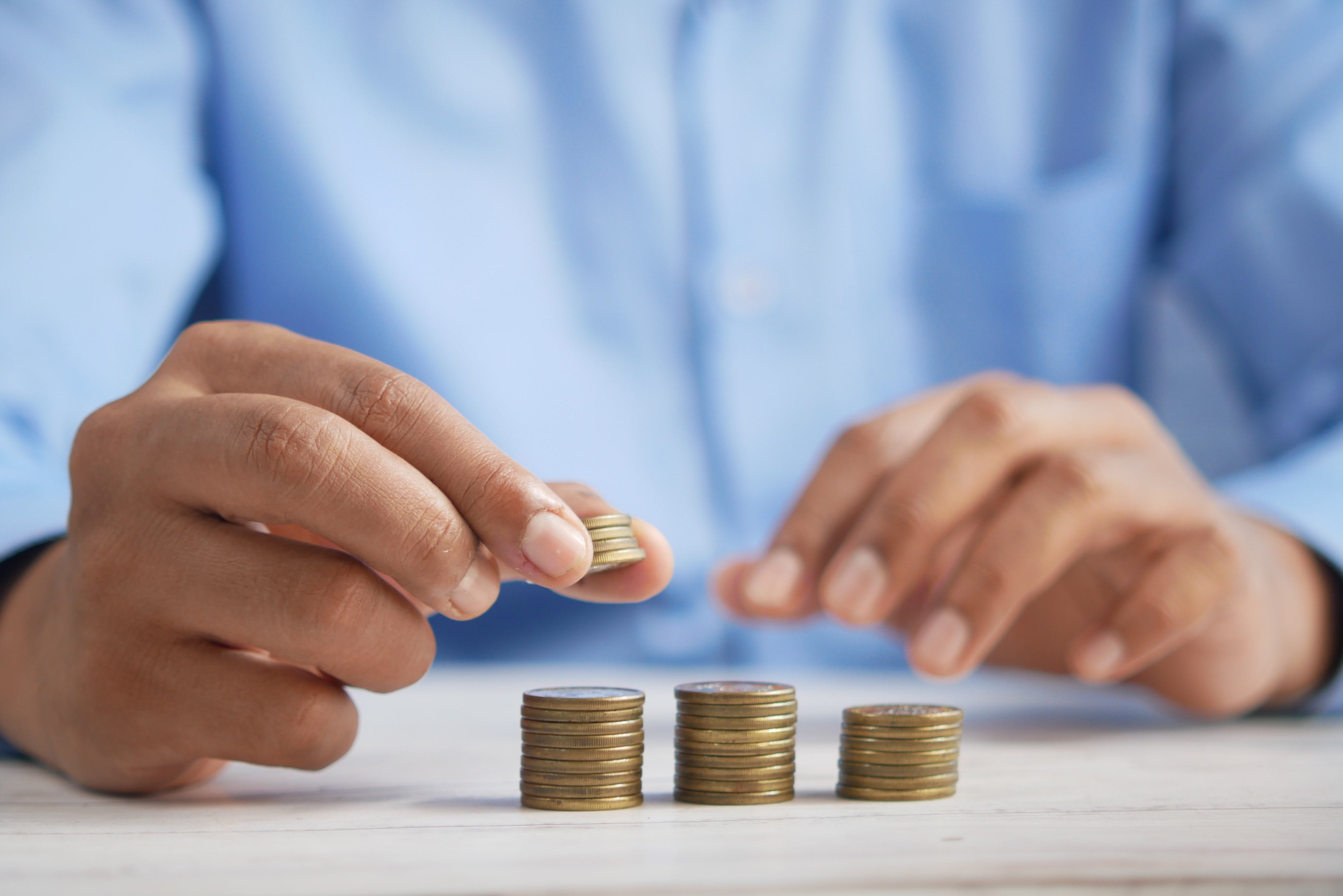 Retirement plan economics can be confusing and complex. In this post, I will show you which factors drive plan pricing so you can use this knowledge to your advantage.

First, you need to get a clear picture of all the potential "hands in the cookie jar". Who are the different service providers in the industry? What are their different roles and responsibilities?

Once you know the service providers you need for your plan, you can assess which services are necessary and worth paying for and which ones are superfluous and unnecessary.

Here’s a high-level overview of the most common service providers and a basic description of their roles, responsibilities, fiduciary capacity, and the potential for conflicts of interest. 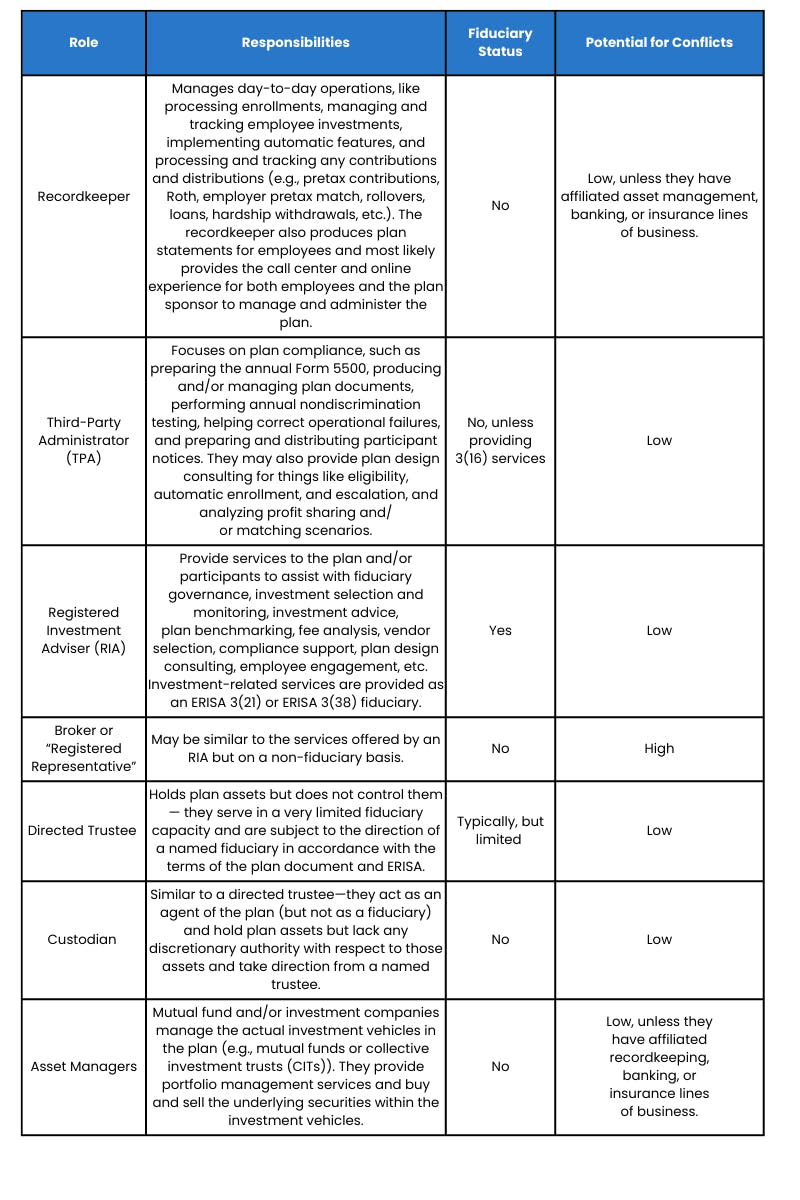 Plans with a high average account balance and strong cash flow tend to get the lowest pricing. For example, let’s compare two plans with the same assets. Plan A has $10 million in assets and 100 participants for an average account balance of $100,000. Plan B also has $10 million in assets but 500 participants for an average account balance of$20,000. I would expect Plan B to be priced higher because it has five times the number of participants, which means more statements, more calls into the phone center, a larger population for discrimination testing purposes, and so on. In most cases, advisor pricing tends to be tied to the size of assets. Therefore, a $20 million plan would expect to pay a higher fee than a $5 million plan. However, advisory fees compress and level off around $50 million in plan assets. A $100 million plan rarely pays a significantly higher advisory fee than a $50 million plan for a comparable scope of services.

There are five basic fee structures within the industry:

Many plans are still tied to some sort of asset-based pricing model. This is by far the most common approach although things are starting to change, especially at the higher end of the market. The industry likes this model because it means that as plan assets grow, fees also increase.

There are only two sources of payment for plan fees:

Each source can pay expenses directly. For instance, a company could hire an advisor and pay its annual advisory fee of $40,000 directly from corporate assets. The fiduciaries could also elect to pay that fee through the plan, and each participant would pay a portion of that fee each year directly from their accounts.

Two indirect sources of payment are:

Once you have determined which types and amounts of fees are appropriate, you need to decide how to allocate these fees. According to leading ERISA attorney Fred Reish, the method of fee allocation is a fiduciary decision that, in his experience, many fiduciaries fail to handle prudently.

There are two primary methods of allocating fees:

To illustrate the difference, let’s consider the impact on account balances for a recordkeeping fee of 0.20 percent (pro rata) versus $100 per participant (per capita):

In contrast, per capita fees benefit larger balance employees and are better for participants over time because these fees decrease as a percentage of assets as balances grow. In the second example, every participant in the plan pays $100 for recordkeeping services, regardless of their account balance. This means that a participant with a $10,000 account balance would pay 1 percent per year on a percentage basis with the per capita method, while the participant with the ten times larger balance ($100,000) would pay 0.10 percent per year for the same services. At a certain point, there's a "break-even" level where all employees above a certain account balance will benefit from the per capita method. It's important to identify that threshold.

Why The Allocation Decisions Matters

From a fiduciary perspective, the allocation decision is important. The DOL has provided guidance that the pro rata method is equitable in most cases, while the per capita method may be reasonable, although the fiduciary “has considerable discretion in determining the method of expense allocation.”

A simple way to analyze the allocation decision that I’ve developed is to build a spreadsheet with two tabs that include every participant’s account balance. On the first tab, you create a fixed fee formula and on the second tab, an asset-based formula to determine how much each participant would pay in both dollars and as a percentage of assets. You also determine the break-even account balance where participants would benefit from fixed fees as compared to asset-based fees. Using this information, you can analyze which method would benefit the highest percentage of participants.

For instance, in a plan with a lot of younger employees or a lot of new hires (with lower account balances), it may make sense to apply fees pro rata. However, if a plan has a lot of high-balance participants, it may be more beneficial to allocate some fees on a per capita basis. This is one of those decisions that can vary from plan to plan based on demographics. There’s no one-size fits-all method.